RCI  is an international association of professional consultants, architects, and engineers who specialize in the specification and design of roofing, waterproofing and exterior wall systems. Their monthly technical journal (Interface) is a very good source of technical information about low-slope and flat commercial roofs.  The March 2014 issue contains an article called TiO2: A Key Ingredient to a Long-Lasting Reflective Roof.  Edited excerpts follow but you may read the entire article by clicking here.

Cool roofs have been around for a long time—decades for sure, and perhaps for centuries. In many warm-weather countries such as Greece, Spain, and Bermuda, folks have long been painting their roofs white and have understood the benefits of reflecting the sun’s energy back into the atmosphere rather than heating the house or building.

In the United States, cool roofs started to surface in the mid-1970s with polyvinyl chloride (PVC) single-ply roof membranes and, later in the late 1990s, with thermoplastic olefin (TPO) roof membranes. According to industry statistics, PVC and TPO roofing reflective membranes have become the fastest-growing segment of the commercial roofing market. It is estimated that thermoplastic membranes have increased in square footage sold by 136% from 2001 to 2012. Dark-colored membranes such as ethylene propylene diene monomer (EPDM), modified bitumen, and built-up roofing (BUR) have lost an estimated 30% in square footage sold in the same time frame.

Titanium dioxide (TiO2) is a white pigment used in a variety of applications to impart opacity, whiteness, brightness, and UV durability.  TiO2 allows a material to have superior optical properties.  Due to the high reflective index of TiO2, there are few if any comparable substitutes.  TiO2 uniquely reflects the infrared portion of the solar spectrum, maximizing solar reflectivity.

Besides making things white, TiO2 pro¬vides a significant weathering benefit for long-term applications such as single-ply roof membranes. In basic terms, the more TiO2 a product has in it, the better it will weather. Laboratory testing indicates that the more TiO2 there is in the exposed top surface of the membrane, the less weight loss occurs in the membrane. As TiO2 content increases, the effectiveness of protection from radiation increases, and the loss/degradation of binder/resin caused by radiation decreases.

One of the best ways to improve the weathering of a PVC or TPO membrane is to increase the loading of TiO2 in the top surface.   TiO2’s inherent characteristics, such as high brightness, opacity, neutral and blue undertone, solar reflectivity, chalk resis¬tance, weather durability, lightfastness, gloss, and mechanical property retentions can be built into the manufacturing pro¬cess. Other surface characteristics, such as compatibility to roofing substrate, optimized dispersion, and ease of processing must be further engineered to meet the final require¬ments of roofing membranes.

Much has been written about the ben¬efits of cool roofing. A study conducted by Lawrence Berkeley National Laboratory confirmed that a cool roof lessens the flow of heat from the roof into the building, reducing electricity demand for space cooling in conditioned buildings. According to the authors of the study, sub¬stituting a weathered cool roof for a conventional darker-colored roof could have a far-reaching energy saving impact per SF of roof area, annually, averaged across the US.

The Cool Roof Rating Council  solar reflectance of some common roofing materials are:

A standard black roof will rise up to 90° F over the air temperature in full sun; a standard white roof will rise up to 15° F. Such has significant implications in terms of energy efficiency, building occupant comfort (productivity), roofing system life, pollution, and the urban heat island (the condition resulting from the combined UV absorption of urban building materials). The greatly reduced temperature rise of a white roof also significantly reduces the expansion and contraction cycle of the roofing material and such has a corresponding effect on the effective life of the roof. For example, even a thermoplastic rubber roof restoration compound, if black in color and left unprotected from the sun’s UV rays, will experience catastrophic failure within approximately 3 YR.

LBNL estimated that retrofitting 80% of the 277.71 billion SF of conditioned commer¬cial buildings in the US would yield annual energy cost savings of $735 million. Besides the most obvious variable of cooling degree days based on the geographic location of the building, the cost of electricity and the number of stories in a building have a significant impact on cost savings. Single story buildings such as warehouses and production facilities will realize much more significant energy savings from a cool roof than say a 20 story office tower. Also not readily apparent from these calculations is that while there are no electricity cost savings from the unconditioned portion of buildings, the approximate 8°-10° reduction in indoor air temperature can have a positive productivity effect on employees working in those spaces.

Similarly, the relatively high cost of electricity in some Middle Atlantic states provide a strong benefit for energy savings even though the Southwest and Southeast have far more cooling degree days (CDD). For instance, with an average cost of 16.73 cents per kilowatt hour in July 2014 (http://www.eia.gov/) and 1,365 CDD (http://www.degreedays.net/), New York has 39% more cooling cost than the US average and only 14% less than Dallas or Jacksonville.

Despite the exceptional track record of some cool-roof technology over decades, cer­tain individuals and some companies within the low-slope roofing industry have recently attempted to cast doubts on the fundamen­tal science behind cool roofs and the energy impact of cool roofs in northern climates. The energy benefits of reflective roofing in southern climates have come to be broadly accepted and recognized. If one accepts that cool roofs provide energy saving benefits in cooling-dominated climates, the intuitive corollary is that reflective roof surfaces are disadvantageous in heating-dominated climates. One might assume that black, minimally reflective surfaces will absorb the sun’s energy in the winter, presumably reducing heating energy loads.

The answer is not quite as simple as it might first appear. Winter days are shorter than summer days, with more overcast skies. Most importantly, the sun is much closer to the horizon in the winter and generates much less heat in the northern states. Winter solar irradiance is typically 20% to 35% of the summertime irradiance for a given location; therefore, a roof surface receives three to five times more sun in the summer than in the winter in north­ern states. Additionally, in many northern states, roofs will be covered by a highly reflective blanket of snow for extended peri­ods of time, further reducing the impact of a darker-colored roof surface on heating energy.

While the financial justification for a new roof is rarely driven primarily by its color, a new roof brings with it an opportunity to benefit from the energy savings and a longer-life inherent to roofs with higher reflectivity.   The reflective nature of TiO2 reduces the heat load from ultraviolet sunlight, resulting in a longer-lasting roof membrane while pro­ducing cooling energy-saving benefits.

Manchester Roofing Systems is based in West Caln, PA. Our overall service area is a 100 mile radius including from North Jersey to Washington and from Harrisburg to the Jersey Shore. Our primary service area is: 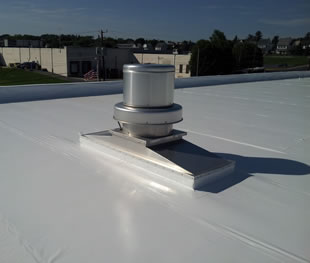 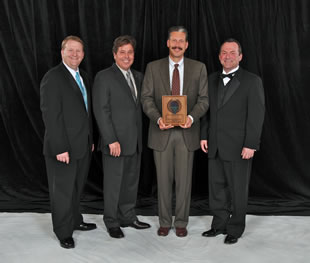 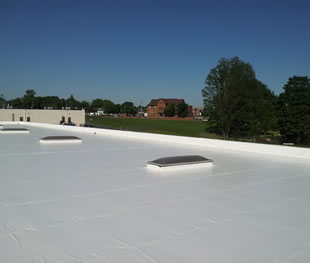